​Getting Here Is Half The Fun!

​Point Roberts functions as an island, because it is a pene-enclave.
This means it is part of the United States that is detached from the mainland. ​You need to enter by land through Canada, by air or by sea.

Crossing into Point Roberts is on the South end of 56th Street in Tsawwassen, BC - the road then switches to Tyee. Exit 28 from Highway 99 going South from Vancouver or Exit 26 going West from Blaine, WA and Eastern Canada is marked by "Tsawwassen Ferries" signs. The dock for ferries to Vancouver Island and other Canadian ports is just past the turn-off for Point Roberts on Highway 17A. ​ It's about 25 minutes from Vancouver International airport (YVR) and approximately 3 hours from Seattle (SEA) coming up on Highway I-5. (Time for heavy traffic and border crossing not factored in)

At this time there is no regular ferry service to Point Roberts. The Point Roberts Marina has reserved a few slips for visitors and US Customs agents greet boats coming in from Canada or places other than the USA. Sailing here, kayaking or even by long canoe are nautical ways to come for a visit.

There is a boat launch at Lighthouse Park for small craft and a pedestrian dock.

Outer Island Tours offers a water taxi service for individuals and groups from their headquarters on Orcas Island.  Link to Outer Island Website Taxi service is available from Vancouver International (YVR) or small planes can land at the Point Roberts Airpark...there are some people in town who use quote marks when they say "airport"...but security is a breeze and the view is great... and lots of fresh air!

Point Roberts Airpark (FAA LID: 1RL) is a single-runway airport located in the town of Point Roberts, Washington. The airport, along with the marina, provide the only access to the rest of Washington state without first having to pass through British Columbia.

In 2000, a new five-plane hangar was built. It also features several couches and serves as a makeshift waiting room.

History
Point Roberts Airpark was originally started by Ray Young. Ray was a cartoonist at Buena Vista Studios. He had a life long interest in flying and moving to the Pacific Northwest. In 1967 he purchased a parcel of land in Point Roberts and started an air strip called Ray Young Field. He moved to Point Roberts with his wife Uvon in 1972. Later on he bought more land and extended the runway to its current length. Ray died in 1985. His wife, Uvon Young, lived in the family home for the next five years but gradually nature reclaimed the land and she closed the runway and put the land up for sale in 1990. In 1996, she sold it to the current owner, Robin Lamb.

In the 1996-1998 period, using a 1955 Galion grader and a 1956 International TD-91 bulldozer, the airstrip was made usable again. The bulldozer cleared the trees and the grader put a 3 foot crown on the runway and cleared the 8 acres of the parking/airpark area.

In November of 1998 the runway was seeded to a low maintenance turf. In the intervening years, except for mowing, the runway has needed no further maintenance and is used year round. The plans for the future include hangar homes and more hangar space. A GPS approach and customs clearance is being worked on.

Current information on the FAA website does not include up to date contact information. Robin Lamb passed away a while back and we don't have updates, but planes land here routinely.

Scheduled Flights to Point Roberts on Tuesdays and Thursdays! 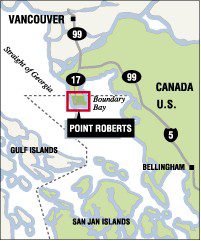